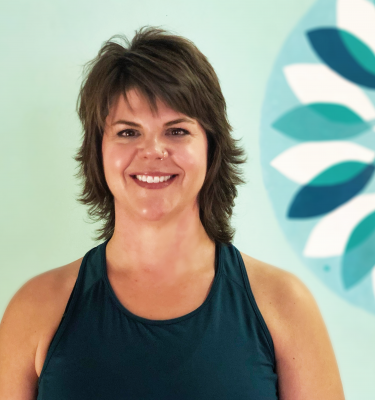 April began practicing Iyengar style yoga in 2007 as part of a journey to become physically active and to help control her blood sugar. She found the practice of Iyengar, which involves the use of props to support the body and accommodate different levels of ability, in keeping with one of her key life philosophies: all bodies and people are valuable and capable and worthy of love and joyous movement.

For the last several years, however, April was presented with a new challenge, which encouraged her to expand her practice to different styles of yoga. After a two year long battle with chronic fatigue and muscle spasms and weakness, April was diagnosed with Lyme and Babesiosis. While she was struggling to remain committed to her practice through the illness, she began attending workshops on Yoga Nidra, Yin Yoga, and Yoga Breathing. Through these practices, April met the mat each day with her body as it was and learned to support herself while healing. She learned to accept that her body was different each day yet no less worthy of time, attention, and caring.

April believes that yoga practices can help each individual come to understand their body, emotions and spirit and the infinite connections therein. Her commitment to yoga and sharing these practices with others is based in the belief that yoga can teach us to value ourselves and others by simply meeting ourselves where we are with kindness and attention each time we practice.